Spotlight on The Dancing Bear

Do you recognize this carving?

It currently resides in the Art Gallery of Ontario in Toronto, Ontario, Canada. 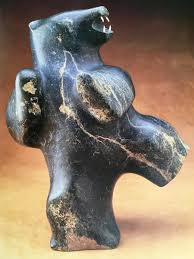 This is THE Bear that started the world's fascination with the Dancing Bear carving style.

This is the most prolific subject in Inuit art; bears that can stand on one, two, three or all four paws!

The artist who carves a Dancing bear must be extremely skilled, experienced and talented.

It is thought that the Dancing Bear originated in Cape Dorset, (Baffin Island) Nunavut. The style of the carving is different in each region of the Arctic.  The Cape Dorset esthetic depicts the animal subjects as being heroic but also humorous. The animals are thought to be able to perform human feats, like lifting up a foot to dance or kick.

Every Dancing bear has its own charm.  Like snowflakes, no two are alike. Ottokie Samayualie's 14" Dancing/Diving bear is the most beautiful 4 way bear that I have seen in some time.

The jet black stone is polished to a mirror finish that accents every ripple of the bears body.  The bear is the poster child for the perfect bear!

And this 4 way Bear can balance on any of its 4 paws!

Can you appreciate the skill and talent required of an artist to be able to achieve what is essentially an engineering miracle? I have so much admiration for Ottokie. These bears are humorous and entertaining.

In their horizontal positions, they look like Olympic gymnasts performing floor routines. These bears are athletes AND dancers AND clowns.  The apple green stone is hard to ignore with its sunny electric neon hue.

Dancing bears.....they are the celebrities of the Inuit bear world.

They are beloved and their carvers are respected and admired for their skill and perseverance.

We have many charming and spectacular Dancing bears in our gallery collection.

Of all the carvings, they are the ones with the happiest personalities.

We've added information on three Inuit communities: Sanikiluaq, Cape Dorset and Kimmirut. Most of our carvings come from Sanikiluaq and Cape Dorset, that is the reason why we chose to write about these two communities first.

Check it out here.